On the 5th March 2015 Esther was admitted at Worcester Royal Hospital with febrile neutrophenia. As the other times this happened, she was fine in herself, but had low neutrophils count in the blood and spiked a temperature above 38C, which meant that we had to stay at the children ward under antibiotic drip, to avoid the risk of developing a life threatening infection. We spent the days colouring, doing art and crafts, watching TV, snacking on hospital food and playing with Nonna (my mum) and Papa’ (daddy).

In the evening of Saturday 7th March, shortly after my mum and my husband left, when we were about to go to bed, my water broke. I got rather upset and called a nurse for help. She reassured me and suggested that I went upstarts to the maternity ward to be checked up by the midwife and doctor on turn that night. She warned the maternity ward about my arrival and I called my husband Simon and my mum, asking them to come back to the hospital. Simon came with me to the maternity ward while my mum stayed with Esther at the children ward.

I was worried because the baby wasn’t due for another 5 weeks at least, around the 13th of April or so. The doctor at the maternity ward reassured us, saying that at 35 weeks the baby is perfectly formed and can already breathe without support, so there was no reason to worry. After a little wait the midwife visited me, checking the heartbeat and making sure that everything was ok. I was dismissed and instructed to go back to the ward by the following evening and if things hadn’t started on their own by then I would have been induced. Late that night I went back to Esther’s room at the children ward, trying to get some rest but actually worrying for both my girls. Esther was fast asleep and didn’t really realise that her much wanted baby sister was on her way.

The following morning (Sunday 8th March) the medical team at WRH had a discussion and agreed to discharge Esther so we could get ready for the new arrival: they arranged for the community nurse to visit our house in the afternoon to give the antibiotic to Esther via her CVC line. We would have had to go back to the hospital in the evening of the same day for the hopefully final antibiotic drip. Esther was happy to be able to leave the hospital and get back home after 3 long days stay.

When we got home we started to get organised for the imminent new arrival, preparing hospital bag, blankets, carrycot, car seat and so on. The contractions didn’t start and there was no sign of the baby wanting to come out anytime soon, which made us worry.

In the afternoon the community nurse came with a special pump to feed the antibiotic in Esther’s CVC, which took about half an hour, and left once it was all done.At 10 pm on Sunday evening Simon, Esther and myself went back to the children ward for the last drip. I remember that Esther fell asleep in the car and when she woke up she found herself back in the hospital hooked up to the drip once again, and she got very upset, starting to scream and say “I want to go home”… Luckily within 45 minutes it was all done, she had no temperature, so we were allowed to leave the ward, to Esther’s great relief. Simon drove her home while I went upstairs to the maternity ward to be induced. The midwife checked again on the baby, who was fine, and put some medication to start the contractions.

What happened after that is a bit blurred. I was given a delivery suite and while waiting for the contraction to kick in I tried to get some sleep. Simon was also there sleeping on a chair next to me. I had to wear a special belt to monitor the baby’s heartbeat and I was looked after by a lovely midwife who from time to time came in to check if everything was ok. I remember that it was very cold in the delivery suite and I kept thinking about Esther at home with my mum.

In the morning a new midwife came and shortly after something started to be wrong with the baby. The new midwife said that the baby’s heartbeat was slowing down and struggling to recover. A doctor came in, with some students, and she very nicely but firmly said to me that they had to do an emergency delivery by C-section because this was best for the baby.

So they took us to theatre, where we were joined by a surgeon, a doctor for the baby and an anaesthetist who was very nice and explained to me what was about to happen. I was given the an epidural anaesthesia and rather quickly after that Alice was born! It was Monday 9th March 2015. Alice was promptly checked by the doctors and with everyone’s immense relief she was absolutely fine! They put her on my chest and she immediately wanted to nurse… She was so tiny! I was overwhelmed.

Shortly after Alice’s birth we were transferred back to the delivery suite where we stayed for a short while and we were then moved to the postnatal ward. In the postnatal ward I was given a double room but the other bed was free, which was nice. Simon left and went to join Esther and my mum at home and I stayed with little Alice. I had some rest, bonded more with my newborn baby while she learned how to nurse. I enjoyed that time at the hospital with newborn Alice, getting to know my tiny baby. I tried to focus on myself and her only, conscious that when out of the hospital things would have been different with a new cycle of Esther’s treatment starting soon.

The same morning that Alice was born the Community nurses visited Esther and my mum at home, took Esther’s temperature and changed the dressing on the CVC line, procedure that she normally didn’t enjoy at all. Apparently she was better this time and started to learn that it wasn’t something to be so upset about.

After a visit to the local park and a run to the shop to get Alice some preterm baby gros and a little present, Esther, Simon and my mum came to the postnatal ward to meet baby Alice! Esther was a very proud big sister and she loved holding the tiny baby, giving her cuddles, singing her lullabies. Seeing them together filled my heart with unconditional love and joy.

Alice and myself were dismissed after two nights at the ward. Esther’s consultant (who in the meantime had been given the nickname of Dr. Brown Bear by Esther and her Papa’) kindly agreed to postpone Esther’s treatment of one week, to give us time at home as a family.

I normally don’t post photos of my girls on the internet, but this time I will make an exception because it is a beautiful picture and memory worth sharing with the world wide web. So here is a photo of newborn Alice and her big sister Esther, my Angel, taken on the 9th of March 2015 at the postnatal ward in Worcester Royal Hospital. 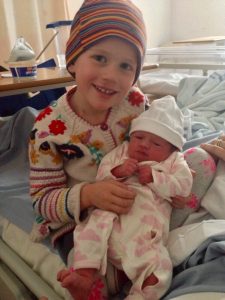 Sadly Esther and Alice had only 15 months together, but they were very close. Esther was fond of her baby sister and because her caring nature she loved to look after her. Baby Alice always smiled and was happy when her big sister was around. They had a special bond and I like to believe that they still do in a way.